The French suffer a crisis of collective identity, as it is difficult to face the world alone, abandoned by a community without vision. What is the objective of the national community called "France "? Maintain the gains? But how? Melt in Europe? But which Europe? Adapt to globalization? But at what cost? Our leaders cover up not only their true goals for France, but worse, their impotence. The case of Euro illustrates this ascertainment, even if it is only the monetary part of our dispossession.

We conceded our monetary sovereignty to the European Central Bank. What ECB done with? Euro is approaching $ 1.35 or more and ECB still wonder if it would ultimately reduce its value! The stability of Euro promised a gradual harmonization of the European economy, but we observe the crushing of industries in southern Europe by industries of North. In addition, it is clear from an economic point of view, that it is better to be outside the Euro zone than inside. We would like the Euro to drop, but who is listening to us? We would like our industry to benefit the same conditions as German industry, but how?

Meanwhile, our trade deficit reach record levels, our businesses are closing, our employees become unemployed, our graduates are fleeing the country and our taxes increase, which does not prevent the fiscal deficit to remain stubbornly high and Public debt to raise.

When all these negative trends will be reversed? When our industry will be gone, when our wages, our unemployment benefits and our pensions will have collapsed? One day, for sure, we will find balance, or the bottom...

Hoping that one day tumble stops, what solutions are offered by our leaders? Take the money here to put it there, and sometimes, with a stunning boldness, microscopic reforms spread over a decade.

To cover the noise of the fall, they try to convince us that nothing more can be attempted, with the help of the choir of profiteers of the status quo at all costs. But even these propaganda efforts are failing, if you believe the polls, the elections and more deeply the general mood of the country.

Therefore, when France will be expected to act? Confusingly, the French know that the status quo is not possible, since they daily see financial, industrial and social divergences require them to renounce gradually to the benefits of a rich, prosperous, powerful nation to reach the status of these dependent peoples that they despised so easily, short time ago.

And yet, the motion only asks to be reversed, as repeat on all the tones more and more economists and as I write it on multiple occasions in previous blogs. Just regain our autonomy so that our production costs will be reduced according to the value that we give to our currency, no doubt less than the Euro, in the way that production in France became more attractive and buying abroad less, to hire and build again.

Blockages that prevent us from doing so are more psychoanalytic than economic: our debt would certainly mechanically increase in local currency but would be stopped, our German neighbors would be dissatisfied, but they would, Marine Le Pen would be happy, but isn't she who would benefit from this policy.

Those who will receive the policy benefit will be courageous statesmen who will get out of the political eunuchs status in which they were locked. It should be added that the recovery of monetary control can only be the beginning of the awareness of Europeans need to leave the EU as an American colony, a condition less tenable while new powers are emerging, China, Russia and Africa.

To survive in their midst, Europe must be able to conduct an autonomous policy, therefore not subservient to power in Washington. Otherwise the U.S. will sacrifice Europe without hesitation to defend their own interests. The case of Ukraine is illustrative, which shows the necessity of negotiate with Russia and not confront it, as the United States want us to.

So, leaving Euro should paradoxically announces the resumption of the power of European peoples over their destiny, a time abandoned to declining U.S.

This is probably why it raises so many contrary passions. 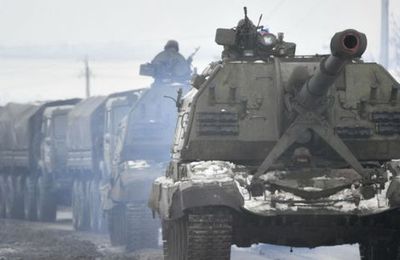